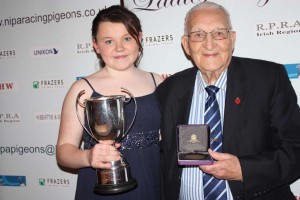 Ellie Marshall from Comber wins Young Fancier of the Year.

The awards for the 2015 season were presented as usual at the NIPA Ladies Night, President Sammy Thompson carried out the presentation.

The Annual General Meeting of the Irish Region will be held in the Templeton Hotel, Templepatrick, County Antrim on Saturday 6th February at 1.00pm. Any member wishing to be on the INFC Committee please attend this AGM for Nomination. Fifteen positions are available and have to be confirmed at this meeting each season. The Agenda will include Minutes of 2015 AGM, Statement of Accounts, Election of Officers for 2016 and New Clubs. Following the AGM a meeting of Region Delegates will be held followed by a General & Appeals Committee Meeting at 3.00pm. Agenda for this meeting will include Minutes of previous meeting, Correspondence, Suspensions/Removals and one Appeal – Percy Son & Murphy v Randalstown HPS. The Secretary has asked for names of all members that have resigned or had a Clearance Sale in members clubs during 2015. This annual meeting will usually mandate delegates on voting procedure on the RPRA Resolutions for the AGM to be held in Coventry on Friday 26th February 2016.