No pigeons have been reported at 22:30 from today’s race.

The NIPA have released in St Malo this morning at 6.30am in a light Westerly wind.

NIPA Lorry waiting in Portsmouth docks, waiting on the ferry to load. Curtains pulled back for plenty air to circulate.

Millar Gold Cup has been won by Carter Bros (Dave & Gerry) of Drogheda, first bird timed on 2nd morning at 5.13am

By the way lads there was one pigeon clocked in the ISRF. It was from the Donnycarney Club and was clocked by John O’Neill just before 9 o’clock on Saturday night. He only copped on the next morning that he had it as he was out working on the night. Myself and Gerry Daly verified the bird and it definitely flew a hard race. This pigeon has flown in all of the channel races this season. This is John’s first win. What a way to do it – only bird in the Fed in race time.

Ligoniel – McMurray & Anderson 14.23hrs second day. Only bird in the East Antrim Sect C, and only yearling in the result.

Ballymena & District 10/39 – Martin Graham 19.34hrs second day. Only bird in Sect B, also 1st Mid Antrim Combine flying 474 miles. Martin has topped the Sect B for the second time in this OB Nat from France.

Annaghmore – A McMullan only bird velocity 276.

The Lone Ranger – 1st Club – 1st section C (only bird timed in section ) 5th Open St Malo 453 miles only a yearling and 1st time ever over the water straight into France delighted to time him 2nd day like the rest of you men I’m gutted for the birds lost and I hope some work they’re way back to us one way or another i lost good pigeons myself including Penzance winner and pigeons with numerous prizes on the channel but timing this brave cock softened the blow a bit well done to Russell Bros on their win. Darren McMurray of Ligoniel.

The Portadown Area have a big record in this race and yet again produced a top result for Allan McDonald who timed his two year old winner at 10.18am on the second morning to take 1st Club, 1st Sect E & 4th Open NIPA. The loft are former winners of the Blue Riband Kings Cup and more recently won Penzance and the Penzance OB Classic. Oliver Jackson had 1st in Bondhill, A McMullan was 1st in Annaghmore and S & N Lester were 1st in Laurelvale.

Congratulations to club stalwart and all around gentleman, Allan McDonald on clocking from St Malo and winning 1st Club, 1st Section E & 4th NIPA Open, from what will go down in history as one of the toughest OB National races in memory.

The winning birds sire was 1st Club, 43rd North Section & 51st INFC YB Grand National in 2014, so steeped in winning bloodlines. On behalf of Paul and myself I would like to say a massive well done, to Allan whose sportsmanship is only matched by his kindness and generosity. Al Larkin, Social Media.

What a fitting tribute on the day of Martins twin sisters anniversary (sadly passed away due to cancer) that he would win 1st Sect B & 7th Open NIPA St Malo Old Bird National  and  name his latest  top performing, 2year old Blue Cheq hen  Champion “Brenda-Ann “, in memory of his dear sister .

Breeding:  Sire – One Of My Top Producers – is a G/son of ” The Big Hen ” (Best of the old Norman Thompson / FVW Family) who is now responsible for 43 x  National prize-winners to date. He is also the G/sire of a hen that was 15th Open INFC Penzance Y/B National in 2015, with only 126 home in race time. He is also sire of Martin’s 2nd bird home from INFC Penzance Y/B National 2016 finishing 42nd Open and Martin can  now add 7th Open St Malo 2017 (only 10 birds in 3 days) to this super breeding cock. Dam – A full sister of Paul Swindell’s Champion “Queen Of The Rain”  who finished 2nd Open INFC Friendship National  with only a handful of birds home in race time. Martin would also like to thank Donal Barry for his professional advice regarding the health of his birds and to the many fancier friends who called or phoned to congratulate him – Many Thanks – . 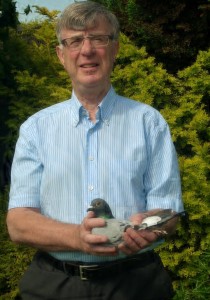 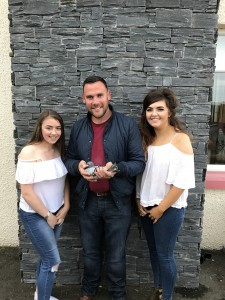 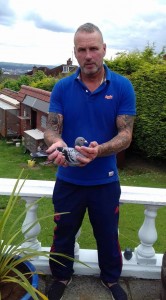 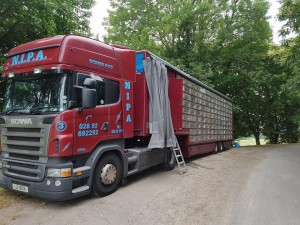 NIPA lorry parked up in a shaded area out of the sun in Saint Malo. Our birds are in good hands lads. Many thanks to Paul for the photos he’s been sharing.