For the second year the Cullybackey HPS returned to the village for the prize presentation, held on last Friday in October, at Toast on the Main Street. A very good turn-out of members and friends were made welcome by Chairman Neil Anderson and guests included sponsors Derek & Geraldine McDowell, Brian Hayes from the Bridge Garage who covered the Single Bird Nomination for the last number of years with other sponsorship, and local scribe Homer and Rosie. Also present Hubert Logan and wife and although no longer racing Hubert enjoys the job of Ring Secretary.

Special guests were the two sisters of the late Len Russell who had passed away just before racing, the former Secretary and Derby Centre manager is missed big time, he will be missed as well in the show season starting at the weekend. Russell Bros had great success racing over the years through to France and after a record breaking season in 1979 were crowned Northern Ireland Fancier of the Year. A Yearling Nat was flown from Weymouth to celebrate the Queens Jubilee Year 1977, and in a close decimal point finish Russell Bros were pipped by the Lurgan loft of McCarron Bros & McAlinden. 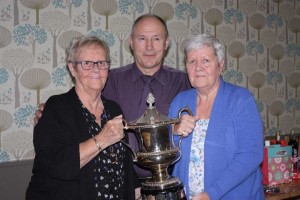 The sisters of the late Len Russell present the Russell Family Cup to Alan Darragh, 30 times the winner!