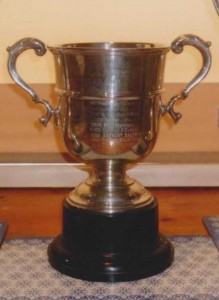 The Taoiseach’s Cup which was the most sought after north road trophy was competed for the first time in 1949. The race point was Cupar in Scotland and the first winners were Flynn and O’Reilly of Dublin. Since then it has been flown for from many different race-points on the north road and indeed records confirms that three different fanciers have won the cup on three different occasions namely W Whitty of Wexford in ’66, ’69, ’75; T Walsh of Kilkenny in ’81,’92,’94; and Marty Siggins of Wexford at a distance of 578 miles from Lerwick won the cup for the first time in 1968 and again in ’71 and ’79. A noteworthy fact is that the Scottish born Stewart Cant who finished runner up in the South Road National in 1932 in partnership with Christy Daly bred four winners of the Taoiseach Cup. Something that his native country, should be proud of.  Text by, Liam O’Comain and Homer.