The Corn Store 5 bird club Dublin had their presentation in the Sarsfield RPC clubhouse after the ISRF prize giving on the Sunday 9th November the day after the Dublin show.
A terrific season for the club seen it go from strength to strength under the guardianship of Jimmy Roberts.
The trophies where sponsored by Sean Hunt and the lads in the corn store again this year. 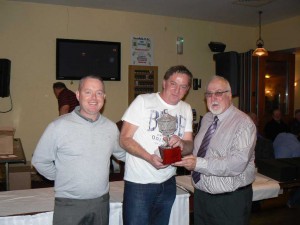 Following is a list of prizes won by the members.

Congratulations to all the prize winners.

Over 10,000 Euros between Pools and Prize money this year. Kevin Barry PO.