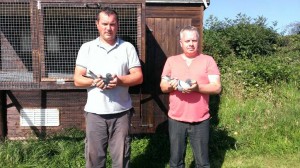 For the opening races of the 2013 young bird season the NIPA held a series of Area Liberations, first birds released in Tullamore and Mullingar at 8.15am and the final one in Navan at 11.30am. Bit of a sore head for the Liberation team and it has been hard to work out an alternative arrangement.

The Mid Antrim Sect B clubs and Coleraine were released in Navan at 10.30am in an Easterly wind and the result was dominated by the lofts at the top end. Jason Campbell broke Novice Status a new member in the Coleraine Premier and he will remember 1st Club, 1st Coleraine Triangle and 1st Open NIPA where 2,661 birds were competing. His Chequer cock  now called Lucie Locket after his daughter raced on Darkness also winning Pools and DTW of £92.The winning pigeon was bred by good friend Jimmy McSeveney out of his good Hongaloot cock Charlie. Hanson & Harpur had a good card and were well placed with five early birds. Steele & McNeill had 1st & 2nd in Rasharkin & Dist and topped Mid Antrim Combine with new member Tomasz Kaczynski a good 3rd. In the Antrim Area Chairman Brian Swann had 1st & 2nd in the Kells & District (1396) and also 1st in the Sizzlers 2 Bird Club. Sam Murphy had a fantastic 1st, 2nd, 3rd and 4th in Randalstown with the winner doing velocity 1377.

Ballymena & District 12/257 – M/M M Sempey 1463, 1458, McFall & McManus 1454, MDC Magill 1452, D Craig 1443, Blair & Rankin 1419, McFall & McManus 1419, Blair & Rankin 1416, D Craig 1412, 1412. The members have been saddened to learn that long time member Jack Balmer has passed away following a period of illness, although he did not race he was a valued member during the winter shows and over the years won a number of Red Cards and had great success in the local area winning a host of BIS, BOS and Most Points in Show at the big local events. He will be sadly missed especially on a Monday night in Ballymena where he rarely missed. We extend our sincere condolences to wife Lily, daughter Susan and the wider family circle. Sad to report as well the passing of Kathleen Smyth the wife of Bobby at Martha Court Nursing Home, she had been in poor health for some time. Again we extend sympathy to Bobby and the family circle.