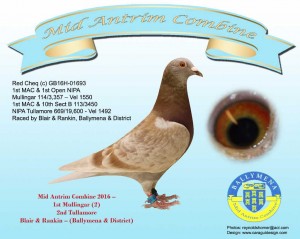 Five local clubs competed in the last season and put up some fantastic performances, claims are required for awards by the end of September. Some facts have already been established Rasharkin & Dist HPS easily won the Club Points Shield in both Old Birds and Young Birds. Also from Rasharkin J & M Milliken win the McIlhagga Cup for best bird in the NIPA St Malo Old Bird Nat doing velocity 965.

For the first time ever sponsorship was obtained and Dixon Contractors from Dunloy put up £600 over the major National & Classic races. In the Champions League winners Rasharkin & District will collect £100 with £50 going to runner-up Randalstown HPS, the final from Penzance featured J & M Milliken v F & G & J Dickey (Randalstown).

Further sponsorship has been obtained from Frazer Animal Feeds in Banbridge and Homer will supply a framed photo of the Champion Old Bird and Champion Young Bird. No decision has been taken yet but there may well be a presentation evening later, that will be something new as well.