The NIPA French Diploma Awards were introduced around 20 years ago and in that time just a small number of birds have achieved repeated success at the distance. The awards are presented to birds that achieve positions in the Premier Old Bird National, usually flown from France. Scoring twice is Bronze Diploma and a fair number of those have been presented with just one season being missed. It gets more difficult for the Silver Diploma having to score three times and then the major prize the Gold Medal & Diploma when the Champions score for the fourth time.

The first Gold Medal & Diploma was won in 2000 by Murphy & Martin of Cookstown with Billy’s Pride, followed in 2001 by Speirs & Campbell of Cookstown with Tommie Girl and Alan Darragh with Golden Dreams. “Tommie Girl” won the following positions. 1st Sect A & 13th Open NIPA Dinard 1998, 8th Sect A & 51st Open NIPA St Malo 1999, 2nd Sect A & 31st Open NIPA Sartilly 2000, 3rd Sect A & 66th Open NIPA Lamballe 2001. Only five have been won up to 2009, that includes B & M Gilmore who collected the major award in 2008 with “Champion Easton Gold” and Alan Darragh from Cullybackey holds the premier place with two. We missed out in the 2009 season, Sam Corrigan won with Champion Blue Boy in 2010 and we had two winners in both 2011 and 2012. In 2011 wins for the East Antrim loft of Elliott Bros Carrick & Dist and Champion Miss Consistence won for B McNeice & Sons of Lurgan Soc with positions including 4th & 7th Open NIPA. Two great distance lofts were added in 2012, C & L Fryers of Dromara and W G Neill of Annaghmore. Five winners in the first 10 years and although France has not moved we have had 5 in the last three seasons. 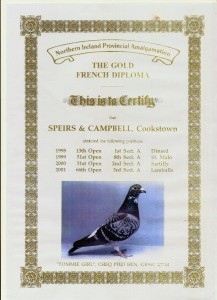