The NIPA had a Committee meeting in the Banbridge British Legion on Tuesday 15th December, main business was dealing with the results of voting from the member clubs of the race programme for 2016. It was decided that the voting would decide the next stage and those programmes that were 1st and 2nd for OB and YB would go back out to member clubs to be returned as usual for the AGM. Votes cast were as follows.

That was the decision for the 2015 racing season, and I have listed the programme actually flown in 2015, a lot of suggestions have been put forward for 2016 racing season , the details of the various race programmes discussed at the recent NIPA Committee on 17th November will be going out to each club for voting. When available I will publish here. 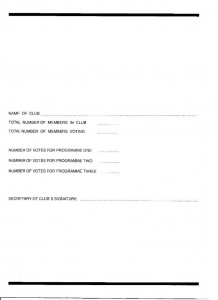