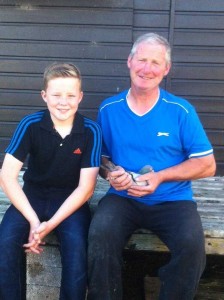 With very poor weather forecast for Saturday the Premier YB Nat from Talbenny in South Wales was arranged to be flown on Sunday 4th September, race marking was on Friday making it a busy day with clock checking for the Fermoy Birds. Liberation was at 10.30am in a Lt Westerly wind with good visibility on the channel. Weather at home was not so hot with a number of showers and light rain, many birds were missing at clock checking, especially the longer flyers. Few results were available when going to press best in Muckamore Centre were Thompson Bros of Crumlin who timed at 15.20hrs flying almost 204 miles, best in Cullybackey Centre were the Percy Son & Murphy team from Randalstown who timed at 15.35 hrs flying 213 miles.