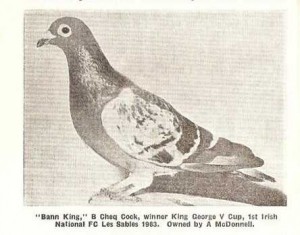 The Blue Riband of pigeon racing in Ireland – the coveted Kings Cup – has been won by a bird owned and bred by 25 year old Anthony McDonnell, Castlerock Road, Coleraine. Anthony was married a day or two after the race and was away when I called his home. I waited until the last possible moment, Saturday morning, and having discovered that he was still not home I decided to proceed to Coleraine in the hope of obtaining some details. Unfortunately no records, ring numbers etc, were available, but with the assistance of his mother, Mrs McDonnell, I set about compiling these notes.

Les Sables to Coleraine, a distance of 634 miles, was flown by “Bann King” NU59CPS-108, velocity 821.8, owned and bred by Anthony McDonnell. Never before has the Kings Cup been won by a fancier flying from far North.