The opening race of the cross channel programme started last Saturday, the NIPA birds were released in Talbenny (South Wales) at 8.30am in a Lt NW wind. Best bird locally was timed by Old Hand Charlie McManus in the Ballymena & Dist, his yearling Blue cock was timed at 12.42hrs recording velocity 1230 for the 218 miles. Ballymena & Dist had a big result, Charlie was followed by G & A Eagleson, J McNaghten & Son and R McFall & Son.

In the final week of the League Competition four lofts have now qualified for the Knock-Out stage starting at Talbenny. All eight lofts scored points in the Group 2, Steele & McNeill got through with a big result from Clonmel, it was always thought this would be the big competition of all four groups. The tie for 4th place in Group 3 & 4 was decided by the Rosscarbery Velocities. Last season’s Champion Loft Reid Bros & McCloy just like last season scraped through in the final race before the Knock-Out stage. All the interest now is on the competition for Talbenny, no League straight Knock-Out!. The competition for Talbenny was:- 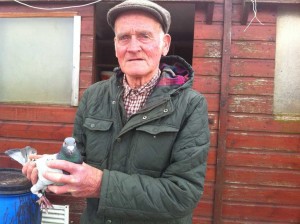