Fanciers & Friends donate £7,300 to NI Air Ambulance Charity and others –

Members off Drumnavaddy Inv HPS have just donated a magnificent £2,300 to the Air Ambulance NI Charity.

The fanciers and their family members, friends raised that substantial sum by various means, which included selling one lottery bonus ball number sheet in conjunction with the UK National Lottery. Prize for this were donated by the Frazier Feeds shop and the members indebted to them for their generosity in having provided this  prize.

The club also run a Breeder/ Buyer sale and they wish to thank all those who supported that in any way.

In addition, Campbell’s Eurospar (Scarva Road Banbridge) generously permitted a collection at the front door of the premises as well as positioning Air Ambulance Charity buckets in the shop.

Drumavaddy spokesperson  David West said, on behalf off  Drumavaddy Inv HPS he would  just like to say a big thank you to everyone who helped to raise this amount – the people off Banbridge, our own club members, family, friends and all the pigeon men and women for their generosity. Also thanks to the buyers of all the numbers on the Bonus Ball sheet and indeed to anyone else for their generosity in making donations towards this wonderful charity.

There is no knowing when any one of us might need help of the Air Ambulance and the very good news is that the money we have managed to raise fills the Air Ambulance Helicopter with fuel four times, so well done and thanks to everyone for making that possible.

This latest effort means that in the past two years Drumnavaddy Inv HPS has given a total of £5,800 to the Air Ambulance Ni Charity, this is amazing amount.

Drumavaddy Inv HPS has given to a variety of charity’s in the last three years a total of £7,300,  this pigeon club is not all about just racing pigeons they are so glad  they can help the local charity’s in Northern Ireland as well. 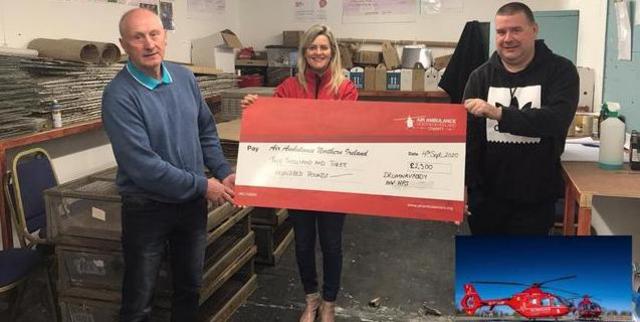