The INFC have an outstanding record of introducing the type of award that lets the individual pigeon come to the fore. The Hall of Fame Diploma has now been on the race programme for some 40 years and then followed the Gold Medal award some 30 years ago. The Hall of Fame Diploma is awarded to any pigeon three times in the INFC Open prize list from the Kings Cup. The Gold Medal is another step up as the pigeon must be four times in the Kings Cup Open prize list. How difficult is this medal to win? – Over the 30 year period of competition only 11 have been won.

The Triple Crown Award sorts out the real special pigeon that we all strive to breed and race. To win this award a pigeon must be an Open prize winner from three INFC National races. The pigeon will start from Penzance Young Bird Nat, the following year the Yearling Nat is next up and then finally in its third year racing the Kings Cup. Would you like to own one of these pigeons? Any fancier would.

The 2011 season saw two more Triple Crown Awards won, the first of these to Sam Duke of Crossgar, the East Down Combine Secretary and a top class National flyer. The winning pigeon is a Blue Chew hen and her record to win the award the first in EDC – 2009 Penzance YB Nat 75th Open, 2010 Sennen Cove Yearling Nat 83rd Open, 2011 Vannes Kings Cup 94th Open. Sam had just the second pigeon to be placed in the Top 100 in all three races. Willie Corrigan of Loughgall is the first member to win the Triple Crown Award with a cock. This Blue cock collected his award with the following results – 2009 Penzance YB Nat 135th Open, 2010 Sennen Cove Yearling Nat 126th Open, 2011 Vannes Kings Cup 143rd Open. Willie is a brother to Sam Corrigan and has a very good National record.

2012 and for the first time since the award was flown for we have no winners. This award has now been flown for over four seasons and we have a total of seven winners. Hens 6 – Cocks 1. To date the hens have been more successful, Mid Ulster lofts have a super record winning no less than five of the seven awards to date. Irish Rover. 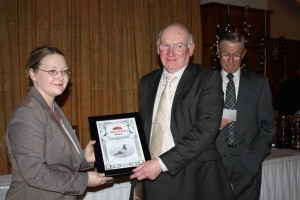