I had the pleasure of attending two very evenings recently, the first in Banbridge British Legion Hall to celebrate the 90th Birthday of NIPA Patron Lyndon Boyle. NIPA Secretary Fred Russell, a life-long friend on Lyndon’s organised the whole evening in his usual professional way. Fanciers from all the organizations were in attendance and at my table we had the INFC officials Eugene Fitzgerald President, Trevor Topping Secretary, and Davy Mawhinney Treasurer. Lyndon Boyle has given a life time service to the sport of pigeon racing. Chairman of the NIPA for as long as I can remember, and was a regular visitor to all the major RPRA meetings in England.

A very good friend Raymond McCracken of Banbridge gave a history of his race record when racing in Dromore and especially from France. Lyndon was also a very valued Committee Member of the INFC and he was also a calming voice when discussions got heated. He is now a Life Vice President. The NIPA & RPRA presented Lyndon with a beautiful chair, the type that can move in any direction. I am also told that the various organizations contributed to a fund that will see several items purchased for his Care Home flat in Banbridge. It was lovely to see Lyndon’s family at the event and also his local Minister. Lyndon Boyle is very highly respected throughout the pigeon world and I am sure he will be looking to be kept up to date on the local pigeon scene, Fred will see to that.

The Beattie Family put on a brilliant Open Night in the Seagoe Hotel, Portadown and welcomed fanciers from all over Ireland. The late Henry Beattie started hil pigeon feed business many years ago in his garage and then son Cyril has expanded it to one of the most widely used throughout Ireland. It was delightful to see Mrs Beattie snr in attendance and she looked really well, a lovely lady! The Beattie Family have always sponsored many events and this year the Glenavy Gold Wing and Sean Diamonds One Loft NCC enjoyed their sponsorship. The Glenavy Gold Wing Race was won by the outstanding loft of D & J Campbell  & Bigger of Eastway. Cyril had obtained ten 2013 Y/B’s from some of Ireland’s leading fanciers when sold at auction by Wesley Sawyers and Steve McGarry they raised some £3,000, quite amazing. In an excellent speech Cyril Beattie thanked everyone present for their support and hoped they would enjoy the evening.

Andy Milliken is about to start building a new loft for Bingham & Seaton of Ligoniel & Dist, they will be back in 2014 with Y/B’s. Maurice Wilkinson of Wilton Cross is featured in the 2014 Squills, and I can now confirm he did indeed win the INFC National Championship that covers a six race programme, two Inland, two Channel and two from France. C & L Woodside from Ballyclare the 2003 National Champions were runner-up to Maurice. 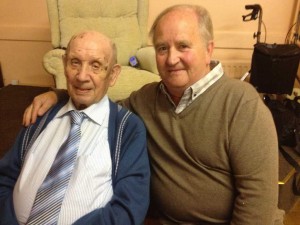