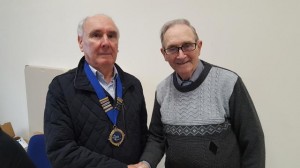 A smaller than usual attendance of Delegates to the 73rd AGM for the NIPA were made welcome to the Protestant Hall in Glenavy on Saturday 10th February by Chairman Ken Wilkinson. He firstly asked the members to stand and observe a moments silence for those members and friends who had passed away since the previous meeting, the list included Patron Lyndon Boyle who until poor health had served the NIPA for many years. The Secretary Fred Russell was invited to read the minutes of the previous AGM, these were passed with no matters arising, as was the Secretary Report and Accounts copies of which had been distributed to local clubs earlier in the year.

For the election of officers for 2018 it was a final season in office for Robert Reid of Carrickfergus and he handed over the chain of office to Sammy Briggs from Lisburn representing Sect D. Robert thanked the members for all their help and support during his two year term in office and wished the new President well. Sam Briggs was asked to conduct the election of officers for 2018 and was assisted by Fred Russell and Robert Reid. Most of the rest were elected as year previous, with some small adjustments.