Portadown & Drumcree RPC:  The local club has had excellent results in 2013 in the first season for the club following the amalgamation of the Portadown Invitation and Drumcree Social clubs.

The best individual results included Bobby Creaney taking 1st Section and 2nd Open in the Penzance Classic and Aiden Fearon was 7th Open in the tough Portland National. Other notable top positions were won by Sloan & Reid who took 16th Open in Talbenny and Paul and Glen Matchett with 19th Open the Sennen Cove Yearling National.

The members worked hard to make the club such a success and the craic and good sportsmanship are the ingredients for a successful future.

The club held a dinner and prize distribution in Sally McNally’s restaurant and an excellent meal was enjoyed by all. Chief guest was Gerald Creaney who  enjoyed much success when racing and now is the loft manager for Ronnie Williamson were his expertise have helped Ronnie to achieve such great results, and also winning the Kings Cup this year. 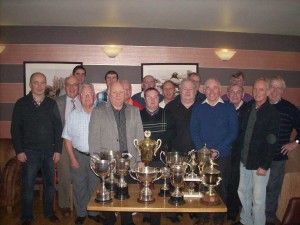