Blast from the past – 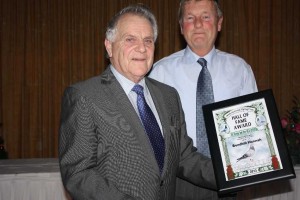 Malcolm Robinson of Bondhill has more than made his mark at National level, his season is geared towards the Derby, Classic and National races. The winning of the INFC Kings Cup is always going to be the number one target for the Robinson loft. In 1996 Malcolm enjoyed a super race winning 3rd & 5th Open and looked likely to win the Harkness Rose Bowl for the Best 2 Bird Average. It was not to be as N Black & Sons of Dromara won the Kings Cup and clocked their second pigeon to be 8th Open taking the Harkness Rose Bowl. Malcolm had not long to wait until he collected the Rose Bowl himself, in the 2000 season. His first pigeon finished 4th Open and the second bird 42nd. From Rennes in 1996 he won pool and prize money of £3,200 and then in 2000 the loft collected £3,827. In 2001 Malcolm won 1st Sect E & 1st Open NIPA Lamballe OB National with a lovely Blue Chequer hen named “Lady Lamballe”. Malcolm is very much National minded and it has been one of his aims to win a coveted INFC Hall of Fame Diploma, three times an Open prize-winner from the Kings Cup. The Hall of Fame Diploma was finally won in 2013 with a 7yo Blue Chequer hen, 62nd Open Vannes 2010, 27th Open Vannes 2011 and 62nd Open St Allouestre in 2013. Malcolm can now set his sights on the Kings Cup.