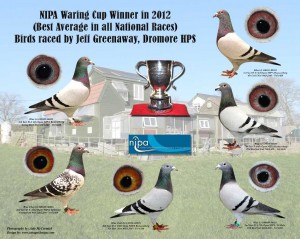 Birds that won the Waring Cup in 2012 season.

SECTION FANCIER OF THE YEAR

Auctioneers Comment :- No fancier has raced more impressively over the last number of years in the Mighty NIPA than Jeff Greenaway of Dromore and just confirmed as NIPA Section D Fancier of the Year for the seventh time. Winner off 7 Awards in the NIPA 2013, last year was the winner of the famous Waring Cup in the NIPA for Best Average in All National Races. Many thought last year was his best, without any doubt 2013 has for sure been better. One of the outstanding results of the year included taking the first 18 positions in the Dromore HPS with over 600 pigeons competing and as well as winning the Section and Open in the same race Jeff had a further 15 pigeons in the first 32 of the NIPA Open with over 21,000 pigeons competing. This will without doubt be one of the Top Quality Sales of the 2013 calendar. Many references of success from fanciers all over Ireland and the UK over recent years with the Greenaway Bloodlines – come and see the quality for yourself!!  Adie.

This week I have decided to cover a loft flying within Section D of the Mighty NIPA, who I consider has earned this report. Now for you the reader outside the confines of the Mighty NIPA, Section D I would say has a radius of some 30 miles, within that area of competition we have over 140 lofts sending upwards of 3,800 pigeons per week. Like many lofts the first thing you want to do is win your Club, then hopefully have the best pigeon in your local area. Then you look for the Section which by no means is easy won, never mind the over-all NIPA Open. To be crowned Top Prize Winner in your Club is some achievement, to be crowned Section Fancier of the Year in the Mighty NIPA is something else. Section D of the NIPA for instance has 45 positions per race. It is now broke into two divisions Old Birds and Y/Birds as is the other Sections. Then the fancier collecting the most points out of the two prospective winning Sections is deemed the Over-all Section Fancier of the Year. Now the points system is as follows 1st Section = 45 points, 45th Section = 1 point. The Fancier in question I am profiling this week, firstly was Section D Y/Bird & Over-all Section D Fancier of the Year in 2012, this season and here is a very impressive statistic over 20 x NIPA Race’s, from the shortest to the furthest spread over O/Birds and Y/Birds this man averaged 39 points per race !!! He will no doubt be confirmed as the Section D O/Bird, Y/Bird and Over-All Fancier of the Year 2013 and this the Seventh Time he has won this prestige award !!. His Name Jeff Greenaway Dromore HPS !!

Many I’m sure will have already heard of the Masterful Jeff Greenaway, a couple of the scribes from here wrote and commented on his performances in 2012 and regarded that as one of his best years ever, that taken into consideration previously one year racing he finished 2nd Open NIPA on five different occasions. So to base last year better than that and who am I to compare or argue, what about this year ? It  must surely be the defining moment in what has been a life time of racing exceptional pigeons and achieving subsequent exceptional results.

Jeff Greenaway you could say was born with the pigeon bug, inherited from his Grand-Father and Father respectively, both raced impeccably over the years with Jeff becoming involved from a young age in partnership with his father flying as W Greenaway & Son in Banbridge. I have had the privilege of meeting Jeff’s father on a few occasions and he celebrated his 70th birthday in February of this year. Still very much involved in helping Jeff on a daily basis with all the stock pigeons housed at his home in Banbridge and is for sure a guaranteed attendee at the racing lofts of son Jeff on any particular race day simply a fantastic charismatic gentleman.

For many years Jeff raced with the Hills & Maze HPS and a continual Top Prize Winner, then the challenge was to come in 2009 when he joined the Might of the Dromore HPS at the heart of the Mighty NIPA, with the official Secretaries office based in the town. The Dromore HPS hosts many powerful names in the sport of pigeon racing and some you may be acquainted with name wise they include the very much formidable partnership of P & J Boal, (Mr Jacobs) Gerald Delaney, Mo McCorriston, Wayne Doonan of the Cock Crow Stud to name one or two, a very very competitive Club !! Now look at the record of Jeff since joining in 2009 and something to take into consideration in the Dromore HPS you must nominate 30 pigeons on a Friday evening when sending so in a since a 30 bird limit for only the 30 nominated are applicable for Club Awards.

2013: Will without question be Jeff Greenaway at the top of the leader board once again, that’s 5 out of 5. On what can be considered his best season ever and without any doubt one of the best seasons ever put up by a fancier racing into Northern Ireland flying with the mighty NIPA with birdage topping 26,883 this year at its height.

One of the most fairest of the Racing calendar was next up that the Fermoy 5 Bird event, only 5 pigeons to be entered per loft, (level playing field) Jeff was to finish 2nd and 16th Section and 2nd and 17th Open beaten yet again to a 1st Open in .3 of a decimal point. Second time in one season. Next was Penzance in Cornwall. it’s a race that the NIPA incorporate a Famous Classic event into, Jeff was only to go and win the Classic finishing 1st Section D and 1st Open with a pigeon named “Gregory’s Girl” on a velocity of 1303ypm. The final race for the NIPA was planned for France but due to continual bad weather the birds where brought back to Portland after a few days on transit, Jeff was to time in a hard race recording 4th Section and 42nd Open on a velocity of 1034ypm.

Now for the Y/Bird programme, I just might add at this stage Jeff recorded no less than 13 x 1st’Clubs of the top of my head in the Dromore HPS over the 2013 seasons and upwards of at least 9 in a row !! When you look at the competition that is some racing.

Now with such an outstanding year and as I put the finishes touches to this report on Sunday evening the NIPA have just announced the winners for this year, Jeff has been crowned NIPA Section D Fancier of the Year for a Second Year on the Trot and now a fantastic seventh time, winning both best fancier in the O/Birds and Y/Birds further more out of all the NIPA Sections coving Northern Ireland, Jeff Greenaway accumulated the most points out of all the winning fanciers, and that’s competing against all the Main Players so to speak !!! Also Jeff collects the W V Troughton Cup for 1st Open Clonmel; Surgenor Cup for the Best Average Talbenny 2, Bude and Penzance; Agar Cup for the 1st Yearling Recorded in the O/Bird Classic; J. H. O’Neill Cup for 1st Open Penzance Classic. Plus will pick up awards for the NIPA Section D O/Bird Fancier of the Year and NIPA Section D Y/Bird Fancier of the Year.

All in all a year to remember for Jeff some would argue the last few years have been years to remember, simply Jeff has created a team of pigeons that without hesitation do the business from the shortest to the longest races, something that is a must if you want the big awards, your team of pigeons must compete from the 1st race to the last and regardless of velocity, speed or wind direction they have to be there, such is the ferocity of the competition. Jeff would be the first to diminish his possibilities any week due to unfavourable conditions, second best you don’t set out to achieve at the start of any year, but also in the same breath he will tell you himself many many hours of hard work have to be put in each week, to achieve excellence week in week out, any fancier can specialize his team for a specific race looking for the big performance, but when you have to plan for success in every race for the whole season it’s a different ball game. Jeff will be the first to admit that success cant just be expected even with the best pigeons, they are the basis on top of that you have your work to put in and the harder you work the more you learn. Without any doubt Jeff is there as far as success goes year in year out producing the big results and each year has just got bigger and better. Even with the success of this year, he has the utmost respect for the competition and he is fearful every week of the excellent fanciers flying just not in the Dromore Club or the NIPA Section D but over-all in the NIPA and has huge respect for the hard working fanciers who week in week out are putting him to the test.

You only have to look at Jeff’s record from Rosscarbery and Skibbereen since 2009 the furthest flying points in Ireland to appreciate his family of champions !!

2013 Rosscarbery National flown on the 17th June the loft was to record a finish of 13th and 21st Section and 47th and 113th Open with 6,212 pigeons competing on a velocity of 1214ypm prior to that the NIPA Hens Yearling National the loft was to record 1st Section D and 2nd National on a velocity of 1326ypm once again Roscarbery and yet again from the same race point the loft enjoyed a stunning result finishing 3rd, 4th, 6th, 7th and 21st Section against 1,164 pigeons and in the Open 7th, 13th, 19th, 20th and 91st against 8,631 pigeon. In the Y/Birds The Inland Y/Bird National from Rosscarbery the team excelled finishing 7th, 15th, 20th and 22nd Section in the Over-all National result Jeff was to finish 14th, 48th, 75th, 80th & 174th on a winning velocity of 1355ypm. The final race of the complete programme was with the Irish National Flying Club and this the Inland Y/Bird National from Skibbereen, what a record Jeff has from this event this year he finished 5th, 84th, 89th, 174th and 177th Open with 325 members sending 2,804 pigeons on a velocity of 1820ypm.

That in itself is something of a record only from a couple of race points over the last five years, I think without question Jeff Greenaway has without doubt earned the title as One of the BEST !!!!.