We are off and running again, with the first race taking place this week from Tullamore in Co. Offaly, a distance of just over 120 miles to most fanciers in the North West. Although the NIPA put racing back one week, its looks like a lot of fanciers still weren’t ready to take the plunge, with many who did send still holding plenty in reserve. The first race, as many of you know, can be a bit hit and miss at times, and more often than not, is full of last year’s late breds and last chance saloon birds that we would probably be glad to see the back of.

This week’s race proved to be one of the quickest in recent years with a tail wind pushing the birds towards the 2,000 yard per minute mark. I’m sure there were one or two who were caught out by this, as the wind although forecast as south west, seemed to have more east in it than anyone expected. A somewhat erratic race was only to be expected then given the conditions, with many birds over shooting and probably ending up in Donegal before turning and having to the strong wind in order to get home.

On then with the results, although at the time of writing my report, a few of the local clubs haven’t posted any results that I can see so unfortunately we’ll have to give them a miss. That said, some clubs don’t seem too bothered when it comes to results so a chance of a little publicity for their members is no big deal. On the flip side, I would like to thank Jim Ramsey from the Derry and District, Sean Campbell from The Rock (sorry, the Amelia Earhart) and Robert Freeman from the Londonderry who are on the ball early this season with their results. All we need now are a few photos and we will be set for the rest of the year. Sean told me that he would get as many photos of the good looking members as he could for next week, so I am looking forward to getting the two photos from him. Rumours however that Tommy White and Andy Mitchell have been to the local barbers for a bit of a grooming have proved to be unfounded.  Silk purses and pigs ears lads, Sean’s words not mine.

First up then we go to the leading club of the week,  The Derry and District, where there are no surprises in seeing the top man from last year, Anthony Mc Crudden is off to a flying start yet again. Anthony not only takes first in the club, but first in Section H again. A real quick one this week for Anthony, with a velocity of 1974 ypm. A welcome return to form for Sean Duffy this week taking second and fourth, plus another three in the top ten. Kieran Reid is knocking at the door again with a good third position, with Jim and Gar Ramsey rounding out the top five. The full result for the Derry and District looks like this, 1st A Mc Crudden 1974, 2nd, 4, 6thth, 7th and 8th S Duffy 1967, 1929, 3rd B+K Reid 1945.

Next up we go to the Rock, where Tommy White takes yet another red card. Tommy has become one of the town’s most consistent fliers over the last couple of years, and gets this year’s campaign off to a super start with a win and two more in the top ten. Tommy’s winner this week was the bird that won Penzance for him last year. A super versatile pigeon and a top fly from Tommy yet again. The Amelia result looks like this, 1st, 6th and 7th T White 1945, 2nd W+D Hamilton 1924, 3rd, 5th and 9th J+R Mc Monagle 1923, 1897, 4th G Mc Glinchey 1911.

To the Londonderry club next where this week it’s the Flanagan and Murray show. Leo starts the season in fine style, taking the top four positions in the club, with Noel close on his tail, taking the next four positions. Great flying from both men who are always hard to beat and are in the results usually without fail every week. No details of the birds, but I do have a mug shot of Leo somewhere.

On then to the Limavady club where two men dominate the top positions. No surprises here, with the ever present Willie McIlmoyle taking the first place while Mr Consistency Ronnie Witherow taking the next three spots. Also in the frame this week D Johnston who takes a well deserved 5th. The full result then for the Limavady club looks like this. 1st W McIlmoyle 1883, 2nd, 3rd & 4th R Witherow 1863, 1861, 1856, 5th D Johnston 1724. Well done to all.

Unfortunately I have no result from the Foyle club this week although they are able to post it on line it seems. I believe their laptop is playing up. I know Paul Maxwell is leading the way, but I can’t give a full result or any velocities.

No results either from the Maiden City where I know club stalwart Tony Rodgers has picked up a long overdue red card. Tony, like myself last year, has been chasing a win for a long time. A great result for a Tony and long overdue.

Well done to all the winners and to all those who took positions in their clubs. And a special mention again for Anthony Mc Crudden, our first Section winner of the year.

All the reports penned by Billy Knox are in the Forum. Click here to read more! 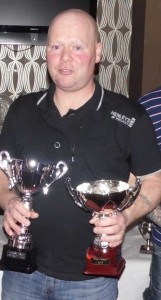