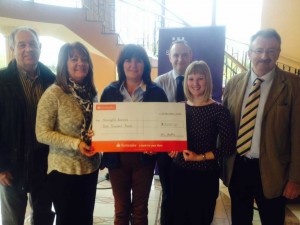 The Beattie Family present a cheque for £3,000 to the Meningitis Research Foundation.

Following the very successful Open Night held at the Seagoe Hotel in Portadown a cheque presentation followed on Wednesday 13th November at the same venue when guests were invited to an early morning breakfast. INFC Patron Ronnie Johnston and Auctioneer Steve McGarry were unable to attend, but those present included Homer and Wesley Sawyers joined by the staff from H Beattie & Son. The total amount raided, including donations at the Social Night were £2,920, and this was made up to £3,000 with the cheque presented to Emma McNeill of the Meningitis Research Foundation. Many thanks to all those involved including those who presented birds from their best. The birds were donated by Tom Marshall, M Maguire & Son, Paul Dunlop, Jeff Greenaway, Jackie Waring, Danny Dixon, W Neill & Sons, Wesley Sawyers, Maurice Wilkinson, Joe Doheny (Dublin) and Scott Irvine Jnr (Scotland). Thanks to the Auctioneers S McGarry and W Sawyers and all those who purchased the stock and thanks to the Beattie Family for the arrangements, Cyril, Hilary and Gillian Bleckley.