For 2014 we had decided on not going on our usual trip to Belgium, we have been going now constantly since 2006 and because of the financial climate here in Ireland  at the moment we decided to give it a miss, however, with us, that is Joe, Derek & myself, things have a habit of changing, pretty well on the spot, and so it was that we booked to go on the 21st of March thinking that all would be well and that our young birds from the usual source would be ready and waiting, after a second chat with the vendor, it was his opinion that we would be better off to wait for another week or ten days. So that’s the situation at the moment with us rebooked to go on April 4th, hope all goes well this time.

Breeding and racing pigeons over a long period is one thing, but to breed and race successfully for over forty years is quite another.

One such man in our club, the Barrow Valley RPC is Billy Brooks who has been winning races now at the very highest level for over four decades right up to the present day, culminating in winning in the last three years alone, 1st Open National Thurso 2011 .2nd Open National Thurso 2012 and 3rd Open National Thurso in 2013 flying 426 miles on one of the toughest routes to fly, from the north of Scotland into the south of Ireland, and these are not the only results as Billy has already won another four National races in the proceeding years all from Scotland.

His family of pigeons have been self built over the years with very few introductions since putting together his team in 1972, when the older strains as they are now called were introduced, strains such as Billy Erwin, Bertie McCabe, and Bob Harkness pigeons, all from Northern Ireland these have been blended together over the years to form a family of birds that can fly all day long to make their home loft ,but  don’t give up easily and will make their way home on the second day if necessary. When you consider that in the three races mentioned above there were only three birds clocked on the day in 2011 with only sixteen clocked in race time, 2012 had no birds on the day with only five in race time, and 2013 had no birds on the day and only three birds in race time, that will give you an idea of the tenacity of these birds.

Billy lives some twelve miles outside town in a small village called Fenagh, with petrol prices what they are at the moment, he normally just sends his birds to the inland race points more or less as trainers not coming back to town to have his clock struck off at clock checking, however I’m not sure that its not the dreaded mobile phone contact that spoils fanciers anticipation of the final result.

Up to a few years ago every member returned to the clubhouse, especially those from outside the town with the hope of a good result, nowadays what I would call a spoiling game goes on every Sunday morning with  fanciers phoning & texting one another even down the line of flight that takes away the enjoyment of the sport to some extent. To me, we are time enough finding out one another’s timing when we enter the clubhouse, that way at least there are a few more members present for the result. Personally I don’t wish to know of any one’s timing until clock checking, sitting in the garden watching arrivals, even late one’s, is what most people enjoy about the sport of  pigeon racing, there’s plenty of time to find out who has clocked what at clock checking.

1982 was a year I remember for two reasons, the first, was the young bird National of that year from Girvan with the Eire National North road flying club, released on the Sunday morning with a good forecast, there was no indication of what was about to unfold in that race, for not one young bird returned in race time and there was no result for that race, it was on the following Thursday that Billy Brooks had the first arrival recorded from the race. On the Friday morning Tony Corcoran had one of his entries return and they were the only two birds ever heard of from Girvan, certainly a race to be forgotten about in terms of returns, but not forgotten as a reminder of what can and has gone wrong in races over the years, and losses in racing are not a new occurrence as some would have us believe.

The second event to bring back memories of 1982 was the loss of one of the best birds to have raced in the south of Ireland , Champion “ Dick“, a fantastic racing pigeon that had already competed on five previous occasions from Thurso 479 miles for his owner, the late Ger Crotty of Dungarvan in Co Waterford , he had won the Munster Federation as a yearling in 1976, was 7th Open Munster Fed in 1977, flew Thurso in 78 & 79 and was then 1st Munster Fed from Thurso in 1980, he was sent again to the Thurso National in 1982 as a seven year old, some weeks beforehand he had taken a bit of a knock in training and had developed a slight limp, but Ger was still confident that “ Dick” would make it, however the race turned out to be plagued by the weather and the birds were held over for a few days, with no sign of improvement in the weather, it was decided to bring the birds back to Girvan for release, although it was not such a difficult race Champion Dick was never seen again, he had flown his last race.

As it happened Dessie Redmond,  from Wexford, another great north road flyer of that era, was the winner that year.

That’s it for this week , let’s hope the weather picks up over the next few days so that we can get started on a bit of training, although with a late start for our Fed this year we should have plenty of time to get a few ready for the first races. 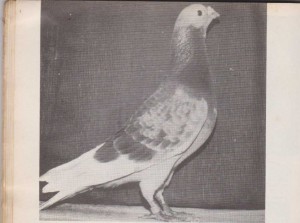