Very interesting last weekend, firstly the race changed from Pilmore Beach to Fermoy and then with the birds en-route diverted to Clonmel because of a weather report for County Cork. We had an early liberation as well with the strings cut at 8.00am and with a helping Lt Southerly wind the leading birds took around 3 hours for the 180 mile flight to Mid Antrim. Alistair Purvis wins for the fifth time in the Broughshane & Dist recording velocity he takes 1st Mid Antrim Combine over 2,200 birds competing and will be well placed again in the East Antrim Sect C. Next best were lofts in Rasharkin & Dist, W & J McLean broke Novice Status followed by Steele & McNeill who had a good card with a small team. The McLean loft race in Sect B, their widowhood cock was timed at 11.06am flying 189 miles, they look set for Sect honours. Roy Clements was best in Ballymena taking 1st Harryville HPS (1781) while Paddy McManus had the Card of the Day again for the second week, 1st, 2nd, 3rd & 4th in Ahoghill with the winner doing velocity 1747.

Ballymena 2 Bird Club – 1st & 2nd G & A Eagleson, G Gilmour ABCD & Nom, W & J Smyth ABCD.  A great win today for big Geoff Gilmour. Racing only a handful of pigeons every week and seldom out of the prizes, he finally gets the Red Card. Geoff races the birds on widowhood and the breeding of the cock is Soontjen with the parents coming from club-mate Jim Harris. Congratulations on your first ever win in the club, I hope there are many more to follow. 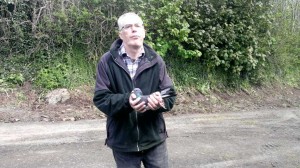