Mid Antrim Combine AGM will be in the Ballymena Clubrooms on Wednesday 13th March at 8.00pm. Only club delegates can vote on business of the meeting. I intend, and I have mentioned this ages ago, to have a Resolution placed that any member club who re-join will be more that welcome, any individual member of the particular club would have the opportunity to opt out if they so wish. That situation should satisfy one and all. It means there are no good reasons why all affiliated clubs should not be competing. Club joining fee is just £3.00, and that payment includes all members who wish to compete. Every single club gives us three positions for the overall result, when we had 9 Clubs it was 27 positions each week. I have had it confirmed that Kells & District have voted to re-join and their members for the Champions League are – Surgenor Bros, C & D Jackson, B Swann & Son, and Harry Boyd. Other teams confirmed include Ballymena & District – J Eagleson & Sons, Blair & Rankin, W & J Smyth and R Service & Son. Rasharkin & District – J & M Milliken, Steele & McNeill, Danny Dixon and W & J McLean. Associate Members fees coming from clubs that are not members remain at £5.00, it won’t get entry to the Champions League but Associate Members will take part in the Old and Young Bird Knock-Out. At this meeting we will have to decide where the £1,250 in sponsorship will be employed, it is also expected we will have a bag of mixture for each NIPA National & Classic. Membership lists will be needed from all member clubs to put forward for the Knock-Out and we will need as well the 4 Lofts to compete in the Champions League. The Agenda is with all member clubs, via E-Mail. Just prior to this meeting at 7.30pm all clubs that use the Cullybackey Centre are asked to be represented to make decisions for the 2019 racing season. All member clubs must help to manage the Centre which has always been Ballymena based.

R.P.R.A. Race point Codes. Distances will be required for the following.

At a meeting of the Management Committee on Tuesday 12th February 2019 the following fee’s were approved for 2019.

Carriage charges for inland and channel races have now been confirmed. 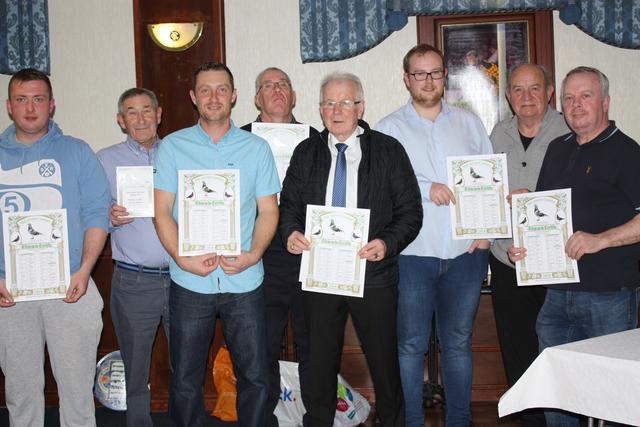