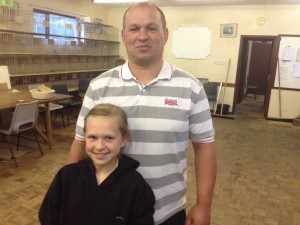 Reid Bros & McCloy from Cullybackey had a dream result in the NIPA Nat from Portland, birds were held for three days in St Malo and not able to be released due to weather problems. They were brought back to the South of England are liberated in Portland on Monday 1st July at 9.00am in a South Westerly wind. Just four gallant birds were recorded on the day, all in the Cullybackey HPS and three of those belonged to Harry McCloy. He races to the famous local location “The Rock” where Reid Bros timed a host of top pigeons at the extreme distance in low velocities. They would have been very proud of this result 1st, 2nd & 3rd MAC and 1st & 2nd Sect B. The winner a Blue yearling cock was timed at 18.18hrs recording velocity 1083 for the 343 miles and finishing 20th Open NIPA with 1,697 birds competing. On 19th June this one was timed first bird to the loft in the INFC Yearling Nat to win 2nd Club, 5th MAC, 33rd North Sect & 49th Open Sennen Cove Yearling Nat 800/4,474. It recorded velocity 1073 for the 335 miles and has recorded two big results inside two weeks. Harry McCloy was best in this race and just two seasons ago his dad, racing as H & R McCloy was best in the Cullybackey Centre to finish, 1st MAC, 1st Sect B & 10th Open NIPA St Malo on velocity 1612.

Des Robinson had 100% returns, one bird sent a 3 year old Dark Pied (c) timed on the day at 20.55hrs recording velocity 839. It was sent feeding youngsters and before the OB Nat had three races in Ireland, Talbenny (1) and the Rosscarbery in place of Bude.