Without a doubt , one of the most coveted awards to be won , within the membership of the IHU members only , the length and breadth of Ireland , is The Millar Gold Cup. This is one of the most valuable cups in the sport and was presented to the Irish Homing Union in 1948 by Mr Thomas Millar of 43 Flora Street in the City of Belfast. It was agreed that the pigeon racing trophy known as the Millar Gold Cup was to be competed for each year from the longest Old Bird race organised by the Irish Grand National Amalgamation, ( under the auspices of the Irish Homing Union), and that to be won outright the said cup must be won 10 times in all by said competitor or partnerships and that said competitor or partners must race from a loft situation in Ireland, and that all persons competing for the said Millar Gold Cup must be members of the Irish Homing Union paying such dues and that on these terms all past winner of the Millar Gold Cup be allowed to compete for this trophy. This years winner timing @ 9.25 pm on the day of toss , beating all racing organisations in Ireland , flying from St Malo was the partnership of R McDowell & Son of Annsborough. Robert is the sole racer and keeps the family name to the fore with the weekends performance . Their latest top performer is a yearling blue cock , sent to St Malo feeding youngsters 2/3 days old. His preparation prior to St Malo was the two Talbennys flying with the EDC then rested prior to St Malo . The McDowell partnership were previous winners of the EDC O/B Derby from Lamballe and this hen also was 2nd & 34th Open Lamballe . The Sire of the Millar Gold Cup Winner is a direct son of the Lamballe O/B Derby winner Dam of the Millar Gold Cup Winner was a gift bird from Lecky Bros & Davies , famous for racing ” Champion Longstone Lass ” . When speaking to Robert to congratulate him on winning the Millar Gold Cup , he was over the moon with the performances of his blue cock . Congratulations Robert on your recent top success. A top result in one of the hardest races in recent years . Steve McGarry. 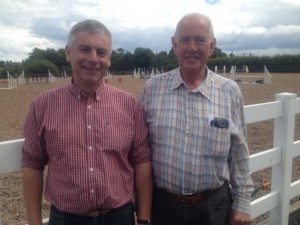