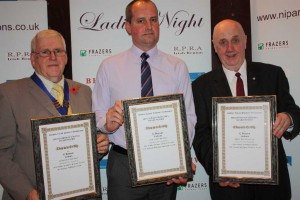 The Irish National Flying Club annual dinner was held recently in the Stormont Hotel, Belfast. Willie McCaw of Ballymoney won the coveted Single Bird Challenge and the Joe Doheny Cup from the Kings Cup. The award was the brain child of David Black and requires a fancier to nominate a single pigeon before 1st April and then prepare it over three months before sending to the Kings Cup race. The McCaw pigeon is a 5yo Dark Chequer hen and she was 19th Open INFC from St Allouestre, the Kings Cup race-point of 2013. The McCaw hen also won a Hall of Fame Diploma (three times an Open prize-winner) from the Kings Cup. In 2011 – 151st Open Vannes, 2012 – 67th Open Vannes and 2013 – 19th Open St Allouestre. You will note she improved her position each year.

I want to go back to 2006 and the Kings Cup race from Vannes and look at the Single Bird Challenge, three of the top National lofts were involved in the final result. 1st Gary Benson of Lisburn with a beautiful Blue w/f hen named “Jean”, she finished 12th Open INFC to collect the Joe Doheny Challenge Cup. 2nd was Ronnie Williamson of Bondhill and 3rd Malcolm Robinson also from Bondhill. “Jean” also won the coveted Hall of Fame Diploma from Vannes, her record. In 2004 – 51st Open Messac, 2005 – 44th Open Messac, and in 2006 – 12th Open Vannes, you will again note she improved her position each year.

Gary and his father Ken told me they were looking forward to the 2007 Kings Cup as they thought she would go close to winning the much sought after Gold Medal (four times an Open prize-winner from the Kings Cup). It was not to be as the race did not take place in either 2007 or 2008 for various reasons. It may as well, have been a blessing in disguise, as she has gone on to breed a number of good pigeons to fly France.  Ken has the race team at his home and I was at the total loft space. One loft only for old birds and young birds – three Sections, no Widowhood and young bird Natural. The YB’s are rarely raced and Ken likes them to grow and develop and then, another surprise, they only breed about 20.

They first raced in Lagan Valley RPC and won more than their fair share, especially from across the channel – at that time the main pigeons raced were Clayton Gits and Wegge. The racing season for the Benson’s revolves around the Nationals and Gary tells me that he likes all yearlings to fly the Yearling National Sennen Cove at 300 miles, and these have always proven to be his best National pigeons.

Let me illustrate the courage and determination of these Benson pigeons to make home on the day. St Malo 2011 and the Bensons had clocked but still kept looking for another one and Gary said to Sammy Briggs he was sure another one would be clocked. It was 10.45pm and almost dark when Ken decided, no chance of a bird and he went into the warmth of the kitchen. Sammy thought he heard the swish of wings above the loft and yes he was right, the pigeon was clocked at 10.53pm and the excitement had hardly died down when Gary shouted “bird on the loft” and he went straight in to be clocked at 10.56pm – in darkness. Sammy then had to ring the late Mervyn Gibson to re-open the Clock Station – an amazing performance!!

I was more than impressed to learn that the loft housed some 17 pigeons that flew France. Gary and Ken cannot thank Norman Thompson enough for the quality of pigeon he has supplied to them with the star being a Grizzle cock. Norman himself is a former winner of the INFC Harkness Rose Bowl.

The Benson’s were 2nd Open NIPA Portland OB National with a Red cock that was an egg from Norman. “Jean” contains a lot of Jimmy Anderson’s bloodlines and in fact Gary named her after Jimmy’s wife. Paddy Burns has also played a part with his famous “Dolly” bloodlines – Paddy is a former winner of the Harkness Rose Bowl. The Gold Medal winning loft of Jackie Waring has also supplied several pigeons from his best. I much admired a Red Chequer cock and learned he was from the McCartney Bros bloodlines, a Kings Cup winning loft.

In 1998 Gary won the McCloud Cup for the 1st Yearling in the Rennes Kings Cup and finished 10th Open, Norman Thompson won the Harkness Rose Bowl , 4th & 18th Open INFC with only 39 birds home in race time of three days. The biggest disappointment for the Bensons came with the same hen that won 10th Open Rennes as a yearling. In 2000 this hen was going for a Hall of Fame Diploma from Rennes and arrived home in race time but minus her rubber ring. The Diploma was not awarded.

The race team are fed an Irish Mixture and Ken maintains Barley is the most under-estimated food. The Benson’s of Lisburn, a Division One National loft!!  Irish Rover.