I had a good chat with Jim Belshaw at the Merit Award night in early January. Belshaw & Anderson collected a Merit Award won by a Grizzle cock from the Friendship National, 9th Open INFC St Malo in 2011 and 33rd Open INFC Quimper in 2012. This fine cock was bred by the Black Family of Downpatrick. This cock had a most un-usual preparation before going to the Friendship Nat in 2011 and 2012. He is not paired until early April and has never flown a land race.

Jim gets him fit flying at home and then several training tosses with his first race being Talbenny and that is his only race before the National. His good friend Ian Donaghy would take the National pigeons to Skerries several times before basketing for the Friendship Nat. Jim was toying with the idea of sending him to the Kings Cup in 2013 but may prepare him again for the Friendship Nat in the hope he wins the Triple Award Diploma ((three times in the Open Prize-list) to go along with the Hall of Fame Diploma (three times in the Kings Cup Prize-list) that the loft won in 1990 again with a White Grizzle cock.

When training his birds for the National races Jim would send them to fly home against the wind. One time liberated in the Ballymena Area and on arriving home a young bird was with them. Jim reported it and the owner was James Anderson of Cullybackey. When Jimmy learned who had it he had no hesitation in telling Jim to keep her and she may do him a good turn. The stray was a Blue hen and she was the pigeon to secure the Harkness Rose Bowl for the Belshaw & Anderson loft.

Another good hen was a gift from the double Kings Cup winner Joe Doheny of Malahide in Dublin and the Kings Cup is the race that some-day Jim would love to win. The loft came very close in 2010 winning 2nd North Sect & 3rd Open INFC velocity 1239. 741 members sent 2,513 pigeons to Vannes and the Kings Cup was won by Reilly & Martin of Bray. The 3rd Open winner was a Blue cock Walkingshaw/Kilpatrick lines.

The Quimper Friendship Nat of 2008 was a difficult one with Donnelly Bros of Newry City winning 1st Open INFC velocity 922ypm, only bird on the day and only 42 in race time. Belshaw & Anderson finished 8th Open doing velocity 650ypm.

Jim Belshaw is one of the old school of fanciers who still race Natural and no YB’s on Darkness. Now retired he is Sexton of his local Church and with his pigeons and a lovely wife, life is good Jim! 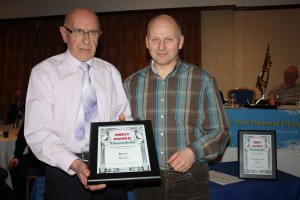