The annual Yearling Nat was due to be flown on 12th June but was put back due to poor weather conditions, the race was flown one week later with an entry of 4,400 birds similar to recent seasons, competing for almost £35,000 in pools and prizes. This is always one of the top highlight of the old bird racing season, liberation on Wednesday 19th June was at 8.30am in a Light NW wind and helping conditions in Ireland. First reports indicate it was one of the very best races, flown on a fantastic day with 1,000 day birds recorded and all positions claimed. Joe Brown from Lurgan had a great race having four birds in the clock before 16.50hrs and the first one timed at 16.13hrs declared the overall winner doing velocity 1151 flying just over 300 miles. It’s always been a favourite race for Mr & Mrs McNeilly of Doagh & District, Brian and Elaine timed their first bird at 16.45hrs flying 324 miles to record velocity 1149 to take 2nd Open INFC.  Kevin Rooney Son & Daughter from Annalong had the first arrival in the East Down Combine, they timed at 15.40hrs and recorded velocity 1145 for the 279 miles for 3rd Open INFC. Owen Kirwan from Goery in Wexford won 1st South Sect on velocity 1137 to finish 4th Open INFC and Grattan Bros from Eastway were 5th Open on velocity 1134 with the first bird into East Antrim.

All club results placed on www.pigeonnetwork.com will be published in Homer’s Odyssey.

IN THE INFC SENNEN COVE YEARLING NATIONAL
COMPETING FOR £34,856.00 POOLS AND PRIZEMONEY.

THE PIGEONS WERE LIBERATED AT 08:30am Wednesday 19th June
WIND : LIGHT NW.

Approx 1000 day birds recorded all positions have been claimed.

Please call back for updates. 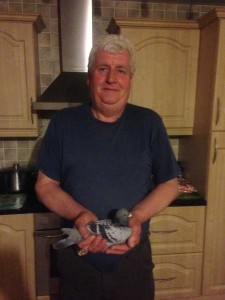