Larne & District one of the largest clubs in the NIPA held the presentation of awards in their own clubrooms at Glenarm Road. President Owen Donnelly and his wife Nancy presented the awards won in in 2012 racing season. Club Secretary Willie Ferguson was MC for the evening congratulating all the winners and thanking all those who assisted over the year. Top Prize-winners winning a cool £1,637 plus a number of cups including the Combined Average was Allister McNaghten. Runner-up also winning a number of cups were the O’Neill Family collecting £1,091 plus the £1,000 for the Monster Sale Bird bringing the season total to over £2,000. Beggs & Hall were next the partners had a number of awards plus the coveted Holden Memorial Trophy plus £844. The Top 10 was completed by Crawford & Robinson £643, new members D & P Harvey £586, Noel Ferguson & Son £458, G K & I Mohxam £384, R Mills & Son £368 winners of the 2 Bird Ave France Cup, Baxter & Holden £309 winners of YB Average, R Glass £238, Brian McCammon £233 winning OBA and Cross Channel Average. After the presentation there was a lovely finger buffet on offer and a credit to Ian Moxham and Owen Donnelly who supplied same. 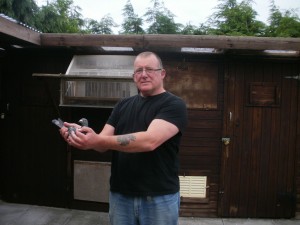