In this section I will feature the 1st Open NIPA winners in old birds and young birds, the Area Liberation winners and those lofts that won 1st Sect where a cup was presented. It’s a massive prize to finish 1st Open NIPA, the top award in the weekly race programme. Almost all the NIPA Sections have cups for the Premier OB National from France, although this year the race was flown from Portland. In Sect E the E & J McCambley Cup Cup is presented for each cross channel race, what a donation that was so many years back. 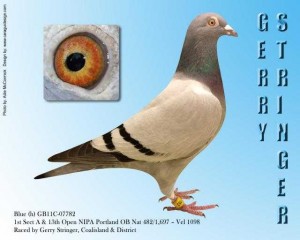