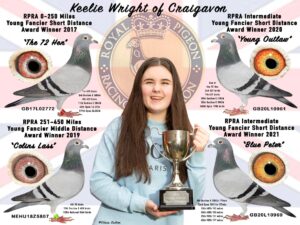 The local (Irish Region) of the RPRA held their annual meeting for the first time in Ballymac Hotel just outside Lisburn in County Antrim on Saturday 5th February, the usual poor attendance can only get better and will probably have to improve. Any member wishing to be on the Irish Nat FC Committee were requested to attend the RPRA (Irish Region) meeting to be nominated or have an apology placed. The Secretary had sent communication to each member club and meeting advert was placed in the BHW.

The President Sammy Briggs opened the meeting by welcoming the members and he asked them firstly to stand in memory of those members and friends deceased in the past year. Since the previous AGM held in 2019 (no meeting in 2020 due to Covid 19 restrictions) with many others we have lost Sammy Thompson, Robert Reid, Davy Suitters and Robert Service.

In his opening address Sam gave a review of the past season and congratulated the various winners both locally, and, to those who had overall success and were presented awards at the recent Blackpool Show. John Connolly from Ballymoney HPS won the RPRA over 450 Miles Long Distance award for 2021 and the Coronation Challenge Cup. Mullen Bros from Blackwatertown WE won the RPRA Young Fancier Long Distance award for 2021 and the Major Len Lewis Memorial Trophy. Keelie Wright from the Lurgan Social has been collecting awards for several years now and the Montage of several of the winners was published on the front cover of this seasons Blackpool Show edition, well done Keelie, hard work and great rewards. This year she lifts the Intermediate Young Fancier Short Distance, 1st Place Trophy, Medallion & £50. The local awards were presented at the annual NIPA Ladies Night, full list below.

The minutes of the previous AGM (2019) were read by Secretary Noel Higginson and adopted as a true record. Next item was the Statement of Accounts and auditor Ron McKelvey gave a report, it was easy to set out as the books had been well kept by Mr & Mrs Reid. Ron gave a very detailed report both on the income from fees etc and changes that will be made ahead which will be of further benefit. A donation was made to the NIPA added to a donation from RPRA to purchase a new trophy to celebrate their 75th Anniversary. Funds will probably have to be set aside to renew the Region Trophy which was in poor condition and would cost nearly as much to fix as a new one. The financial report was very good, and the meeting decided to update the Secretary expenses which had not been changed since he took over the role.  The accounts were passed.

Chairman Cormac O’Hare gave a report from the RPRA Council meetings, some queries had been raised and sorted and good to report that our Irish Delegates play a very important part in the proceedings, as good as ever I can remember. The complication of the local region hearing appeals regarding NIPA has I think been sorted, the Armagh case is to be heard at the Council Meeting in February. There being no other 2021business the meeting moved on to the election of officials for 2022.

After the tea break the meeting proceeded with the General & Appeals Committee and Delegates.

The School application packs for the RPRA One Loft race were distributed.

Affiliation Fees for 2022 – Clubs, Single Members, Individual Members and, each Partnership Member all £12.00. Must be paid through one Society Cheque and made payable to Royal Pigeon Racing Association – Irish Region. Societies in arrears at 1st March 2022 will be called upon to pay an extra 50p per Member and £10.00 for Club. Willie Reynolds PO.

RPRA members and affiliated organisations are able to pay membership subscriptions and order rings through our online ordering system.

Click on the image on the right to begin. As with the automated transfer system, individual members will need to enter their own RPRA loft number and the e-mail address that we have recorded for them in our membership database.

Club Secretaries may also log in to the system and pay subscriptions etc for their club, but for security reasons will need a password in addition to their club number and e-mail address. (This password is the same as that you use to access the RPRA results program.) If your club is not already registered, you can obtain a password by e-mailing passwords@rpra.org – please note that it may take up to 72 hours to receive a reply.

To pay subscriptions as a Club Secretary: once signed in you will need to select the black ‘Subscriptions’ button at top right of the screen. Then from the drop-down box select each loft for which you want to pay subs, followed by clicking on the ‘Select’ button. You will need to follow this process for each loft/member. Once you have selected all of the relevant lofts and clarified in the tick box if you are paying the club fee, click the green ‘Checkout’ button and follow the payment process. You will receive an automated e-mail confirming payment.

If you think that we may not have your e-mail address in our database, please send a message to details@rpra.org – remember to include your RPRA loft number, name and address. You will receive an automated reply, and we will update your details as soon as we can. It may take up to 72 hours for the update to take effect.

You can still order rings through the post with a form and cheque, of course: click on the appropriate image below to download the form, and complete and send it to RPRA HQ with the appropriate payment.

On behalf of the organisers of the above auction I would just like to say a massive thank you to all the fanciers who donated kits of six x 2022 young birds which were sold at our recent online auction.

We also would like to thank Mr Steven McGarry for all the time and effort he put into making the auction such a great success. A very professional job in the way and manner, in which he presented the details online. To date the amount raised stands at £17,675 via sale and donations.

If anyone would like to make a donation, to help us reach around £18,000, please send your donations to Diamond Carson 11 Mountpleasant Banbridge BT324DD all cheque’s made payable to Southern Area Hospice Newry. A final figure will be published as soon as all lots are paid, and photo shoot and presentation will be arranged. Once again thank you all for your support. Diamond.

Well done A M Boyle. Runner-up Raymond McCann. 3rd place R & J Parke. Ps I miss a couple results due to them being on the old pc which is broken hopefully that’s them all now updated.

Latest News – I understand the Cullybackey HPS have returned to the MAC after conducting a democratic vote, that’s good news and for the first run of voting re the NIPA Young Bird programme the Ligoniel & District one for Mass Liberations all the way secured just short of 50% in the overall vote – 56 clubs returned voting papers.

A further update on the voting for the young bird race program. The Final tally is as follows.

The number of votes required to obtain 50% is 353, no programme received 353 however  programe C was just a few short of that total.