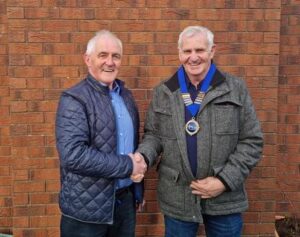 Davy congratulated Paddy on his appointment and wished his well for the future.

Davy has now completed his 2-year term, which he said was an honour and a privilege for him, something he never expected, and it must be said it was the most difficult 2 years from the conception of the NIPA 76 years ago with many changes and meetings within his tenure.