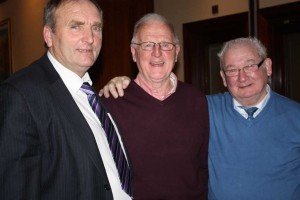 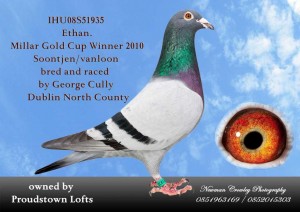 We are running a bit of research on the above highly prized award, 1st IHU bird in the seasons Blue Riband OB Derby usually from France. Bob in his year had the only bird on the day from Dinard, I hope to have more on this and details from Christy Keogh as well. Any former winners should make contact, or indeed anyone with information.

In the meantime the link below features the winner in 2008 Davy Brown on Northside.

A visit to Allan Brothers, Sandymount.

“Solo Queen” their Dinard winner was presented to them as a young bird by Mr. Ken Rhodes, another prominent Sandymount fancier. She is a two year old hen of Delbar Stock and has been one of the most consistent birds in the loft over the past two seasons.  As a youngster she was raced all stages to Tralee 150 miles.  In her first year as an old bird she flew all stages to Penzance 220 miles, always coming well and taking minor positions.  This year she really came into her own, taking 2nd club Fishguard, 1st club, 6th Federation Penzance and then on to Dinard, sitting 16 days, where she was clocked after 12½ hours on the wing.

Congratulations to Allan Bros., on clocking their good hen from Dinard, the only bird on the day. This hen was sent with all confidence, being pooled all the way.  She well justified herself winning over £200 and six trophies, among them the Millar Gold Cup. These crack fanciers in the past four years from Penzance along have taken 2 first and 2 seconds as well as topping the Dublin Federation Second club were those great triers, Keogh Bros., who clocked their mealy hen at noon on the second day.  Third club and another loft in the form throughout the season were Berney Bros., clocking their yearling cheq. hen at 8 a.m. Monday.  A special word about veteran fancier Des Murray, who clocked at 7.20 a.m. Sunday.  After clocking he decided to catch up on some lost sleep and awoke too late to have his clock checked in at the clock station within the regulation three hours.  Des won £65 in the last years Derby with the same pigeon! A costly rest.

Four birds arrived home in race time, a record in the club from France, also more than any other club in Dublin. 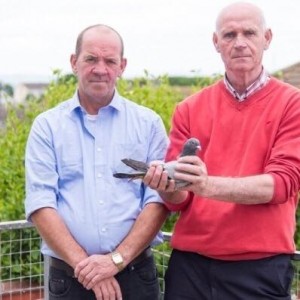 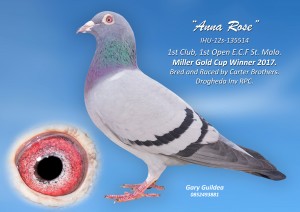 Carter Bros – Miller Gold Cup Winners 2017
One of the most prestigious awards on the racing calendar is the Miller Gold Cup. Each year many fanciers send in the hope of winning this award. Unfortunately this year the race panned out unfavourably for most , with only a handful of very gallant pigeons making it to our shores. This year the much deserved winners of the cup was partnership of Carter bros. Gerry and David who race in Drogheda Invitation RPC with the East Coast Federation are well known for their consistent performances on the channel being a regular name on the federation open results sheets. The brothers have been involved with pigeons from a young age having inherited the love for the sport from their father Thomas.
Their 2017 gold cup winner is a cracking little 5 year old blue hen now named Champion “Anna Rose” after Gerry`s Granddaughter. The hen has been very consistent for the loft having had many past positions on the channel including 1st in the club and 28th Open ECF from St Malo in 2015 . The hen was also placed 4th Club from Bude the same year. This year the hen was across the water twice in both Talbenny and Bude on the lead up to St. Malo. In the weeks between coming home from Bude and being sent to St. Malo she was trained as far as Leopardstown on the training lorry of John Flood. Gerry and David race all their pigeons on the natural system, with the hen being sent feeding a 4 day old young bird. The Sire of this hen was also a successful channel racer, having won the club and placed 16th Open E.C.F from a very tough Portland race in 2013.
The Carter brothers would like to extend congratulations to all who timed and would like to thank all of the fanciers who got in contact with them to congratulate them.